THIS COMPLEX, engrossing and detailed glimpse of two separate lives that function as a single unit is above all a love story: Intermountain Jewish News review, April 21, 2016; click here to read the entire review. 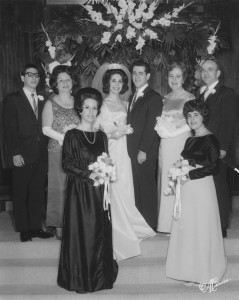 It’s hard to believe it is 50 years since our wedding day! Gathering with us on Dec. 26, 1965 was Joyce’s sister, Sharon, (front left) and Steve’s sister, Syril (front right), Joyce’s brother, Jack (top left), her mother, Beverly and Steve’s parents, Miriam and Milton Foster.

The Rabbi and Senator Sleep Together. Many people have asked us why we wanted to write the book. Some have loved the title; others have not. But we think the title not only reflects our sense of humor but also how we have successfully been able to marry religion and politics for more than 50 years.

We feel our lives have been unique in a few ways and we hope our experiences can help those who have chosen to live a public life, particularly clergy and politicians.

It is unusual for a rabbi to spend his entire career at one synagogue but that was the case for Steve, who spent 11 years as the assistant and 29 years as the senior rabbi for Temple Emanuel in Denver, Colorado. He became known for his sermons on social justice issues, including civil rights and gay rights, gun laws and legalized marijuana. Additionally, he has been an active supporter of Israel, including accompanying Jews fleeing anti-Semitism in other countries and resettling in Israel.

A Politician in the Family

Joyce unexpectedly entered politics in 1993 when elected as the first Jewish woman on the Denver City Council. In 2008, she was elected to the Colorado senate where she served until January 2013. She also has been outspoken on social justice issues and an advocate for the mentally ill, including talking about the suicide of her father.

Working as a Team

We often reached out to other faiths and politicians of different parties, and brought segments of the community together to problem solve.

The book was initially Joyce’s idea when she was a young wife of a busy rabbi, juggling three young children and facing loneliness. She jotted down some ideas for the book on a yellow notebook, which are included in our book. When she urged Steve to retire in 2010, we began to discuss writing a book about both of our lives and what we have learned as a rabbi and a senator.

We hope you enjoy our journey!

“This book is an antidote to both the cynicism that has poisoned politics for so many Americans and the skepticism that too many feel about religious communal life in our society. Theirs is a refreshing story of political idealism, relevant spirituality, and sacred service.  Of course, at the end of the day it is a love-story.  Joyce and Steve’s story is a call to all of us (Jewish or not) to be our best selves.”

If you’re interested to learn more about us, media inquires, interview requests or to just say hello, please click the button!